There are multiple generic manufacturers of Ethacrynic Acid 25 MG tablets.  However, data from the National Average Drug Acquisition Cost provided by the Centers for Medicare and Medicaid Services show that the prices fluctuate over time but consistently move in lockstep.  Given the significant fluctuation in prices, the only rational conclusion is that the generic drug makers are colluding to fix the price at an artificially high level.

Unlike the other loop diuretics, etacrynic acid is not a sulfonamide and thus, its use is not contraindicated in those with sulfa allergies.[1]

NADAC data was combined with data from ndclist.com (Search Results for Ethacrynic Acid | National Drug Codes List (ndclist.com)) to determine the drug manufacturers based on the NDC codes.

The table below shows the per tablet pricing.  Some patients require a two tablets per day so if, for example, the price shown is $10.00, the monthly cost for that patient is $600.00.

Edecrin was approved by the FDA over 54 years ago.  There are 10 manufacturers of its generic equivalent.  However, based on the most recent data all are charging identical prices which are 65% higher than the prices 6 months earlier.  The only rational explanation is that the competitors are artificially inflating the price to benefit each other at the expense of patients that are dependent on the medication.

Popular posts from this blog

August 08, 2019
Microsoft Power BI Licensing Basics Introduction Microsoft Power BI's licensing has evolved over time and can be a bit confusing.  The goal of this post is to clear up the confusion. Power BI Publishers vs. Consumers Within your organization there will typically be two categories of Power BI users: publishers and consumers.  Publishers are creating reports using Power BI Desktop and publishing them to the Power BI Service.  Consumers are viewing the reports and dashboards on the Power BI Service and interacting with them. Licensing Requirements Each publisher will need a Power BI Pro license.  The licensing for consumers is where it gets more interesting.  Each consumer also needs a Power BI Pro license, unless the report is in Power BI Premium capacity.  In that case, consumers just need to be assigned a Power BI Free license. Power BI Premium When you purchase Power BI Premium, you are buying capacity in the Microsoft Azure cloud, not a license.  There is no limi
Read more 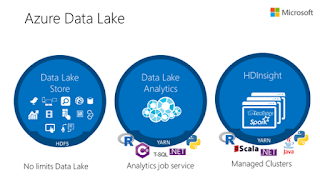 Introduction You may have heard of Data Lakes and are wondering if it is the next big thing.   This post will provide an overview of Azure Data Lake, how to use it and some of its pros and cons. History of Data Lakes and Azure Data Lake The Data Lake term was coined by Pentaho in October 2010 to address limitations of a data mart, which typically has a subset of attributes and is aggregated.   Per Jamie Dixon’b Blog, the lake terminology was chosen since “the contents of the data lake stream in from a source to fill a lake, and various users of the lake can come to examine, dive in, or take samples.” Microsoft’s Azure Data Lake became generally available in November 2016, as described in this post: https://azure.microsoft.com/en-us/blog/the-intelligent-data-lake/ .   There are really three services that make up the data lake as shown in the diagram below.   The underlying technology for the data lake is based on Hadoop, but as an end user that is transparent.   You
Read more